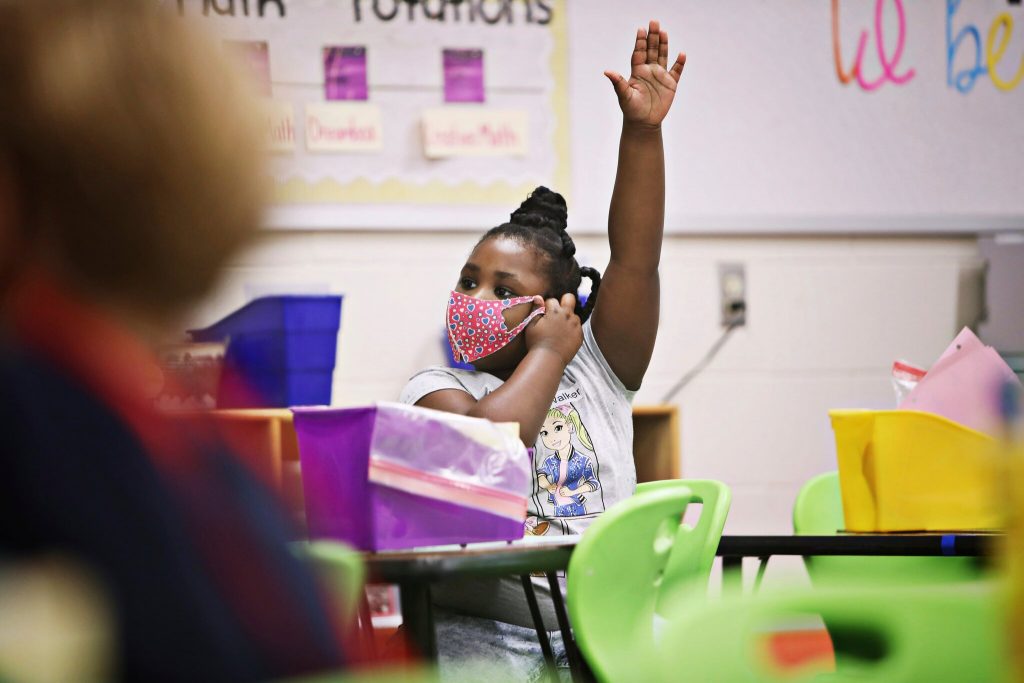 The Centers for Disease Control and Prevention urged schools on Friday to fully reopen in the fall, even if they cannot take all of the steps the agency recommends to curb the spread of the coronavirus — a major turn in a public health crisis in which childhood education has long been a political flash point.

The agency also said school districts should use local health data to guide decisions about when to tighten or relax prevention measures like masking and physical distancing. With the highly contagious Delta variant spreading and children under 12 still ineligible for vaccination, it recommended that unvaccinated students and staff members keep wearing masks.

The guidance is a departure from the C.D.C.’s past recommendations for schools. It is also a blunt acknowledgment that many students have suffered during long months of virtual learning and that a uniform approach is not useful when virus caseloads and vaccination rates vary so greatly from place to place. Some experts criticized the agency’s decision to leave so much up to local officials, however, and said more specific guidelines would have been more helpful.

School closures have been extremely divisive since the outset of the pandemic, and advising districts has been a fraught exercise for the C.D.C. Virtual learning has been burdensome not only for students but also for their parents, many of whom had to stay home to provide child care, and reopening schools is an important step on the economy’s path to recovery.

“This a big moment,” said Dr. Richard E. Besser, a former acting director of the C.D.C. “It’s also a recognition that there are real costs to keeping children at home, to keeping them out of school, that school is so important in terms of children’s socialization and development and it provides other supports as well.”

Virtually all of the nation’s major school districts plan to return to regular in-person instruction in the fall, and some are still trying to persuade hesitant parents to send their children back. Others are not giving parents a choice; New York City will not offer a remote learning option in the fall.

Not everyone seemed inclined to follow the new advice. In California, for example, state officials announced Friday that they would continue requiring masks for everyone in school settings regardless.

The C.D.C. was prompted by the national vaccination campaign, which has vastly changed the complexion of the pandemic in the United States. Erin K. Sauber-Schatz, a captain in the Public Health Service Commissioned Corps who helped lead the C.D.C. task force that wrote the guidelines, said agency officials “really want to get kids back in the classroom” and believed the time was right to tailor prevention strategies to communities.

“This guidance has been written to be really flexible,” she said.

One major shift is in the recommendation for physical distancing. The agency continues to advise that students be spaced at least three feet apart, but with a new caveat: If maintaining such spacing would prevent schools from bringing all students back, they could rely on a combination of other strategies like indoor masking, testing and enhanced ventilation.

Still, the agency said that schools may opt to require universal masking if local cases were rising, for example, or if a school could not determine how many of its students and staff members were vaccinated. And it urged schools to “be supportive of people who are fully vaccinated, but choose to continue to wear a mask.” In general, students and staff members did not need to be masked when outdoors, the agency said.

The C.D.C. also strongly urged schools to promote vaccination, which the guidance called “one of the most critical strategies to help schools safely resume full operations.” Studies suggest that vaccines remain effective against the Delta variant.

The country’s two major teachers’ unions, which have close relationships with the Biden administration, praised the guidance. Randi Weingarten, the president of the American Federation of Teachers, whose members in some cases fought the reopening of schools this past school year, said the recommendations are “grounded in both science and common sense.”

Still, both school and public health officials predicted challenges ahead.

Ms. Weingarten said the mask guidance posed a particular test, since classes with students 12 and older would most likely include a mix of vaccinated and unvaccinated students. Many officials in areas with low vaccination rates have already said they will not require masks in schools — and at least eight states have already banned such requirements.

Some parents who have advocated school reopening greeted the new guidelines with relief. Meredith Dodson, whose son is entering kindergarten this fall in San Francisco, organized a group of parents who spent the last school year fighting for the city to open its schools. The city finally allowed elementary school students to return in mid-April, but most middle and high school students were not able to do so at all.

“This is a huge step in the right direction,” Ms. Dodson said.

Many schools have already largely or entirely returned to in-person learning. By mid-spring, the vast majority of districts had allowed at least younger students to return to classrooms, although many, especially on the West Coast, only allowed them to attend part-time. Many families — especially Asian American, Black and Hispanic families — chose to keep their children learning remotely.

Jennifer B. Nuzzo, an epidemiologist at Johns Hopkins University, said that while leaving decisions on school safety protocols to local officials might sound good in theory, it could prove “paralyzing” by putting prevention strategies up for negotiation and debate.

“I really hoped they could issue very clear guidelines specifying what level of distance is required,” she said, “and not sort of like a meditative journey on the relative benefits of distance.”

Other experts, including some who have been highly critical of the C.D.C., praised the new guidelines.

“For the first time, I really think they hit it on the nose,” said Dr. Benjamin P. Linas, an infectious disease specialist at Boston University. “I think it’s science-based and right on the mark.”

Dr. Linas said that he anticipated pushback to the recommendation that unvaccinated children wear masks, but that it still made sense.

“I don’t want to send my 11-year-old to school without a mask yet, because Delta is out there,” he said, referring to the highly transmissible variant that now causes the majority of cases in the United States. “And even if she’s not going to get severe Covid from Delta, I’m not ready to take that risk.”

Children have made up 14 percent of all cases to date, up from around 7 percent this time last year, according to the American Academy of Pediatrics, though serious illness and death among them remains rare.

Around 2 percent or less of all coronavirus cases in children result in hospitalization, and even fewer — .03 percent of cases or less — result in death, according to the association’s research. Young children are also less likely to transmit the virus to others than are teenagers and adults.

Still, scientists are concerned about a mysterious inflammatory syndrome that can emerge in children several weeks after they contract the coronavirus, including in those who did not have symptoms at the time of their infection. Some children may also experience lingering, long-term symptoms after being infected, a condition often known as long Covid.

There are also questions about what role the more contagious Delta variant may play as children and teachers return to the classroom this fall. Captain Sauber-Schatz said the prevention strategies that had worked for Covid-19 all along also worked for the Delta variant, so for now the C.D.C. was “keeping a close eye on it.”

The new guidelines still rely on quarantine as a prevention strategy for unvaccinated students when they are exposed to the virus, which Emily Oster, an economist at Brown University who has pushed to keep schools open, criticized as a significant hindrance for students and parents.

Physical separation has been contentious, and the new guidance may not resolve the debate. While the C.D.C. recommends that students be permitted to sit just three feet apart, it continues to call for teachers and other staff members to remain at least six feet from students regardless of their vaccination status — and if they are unvaccinated, six feet from one another.

Some experts, including Ms. Freeman and Dr. Besser, found that aspect confusing. Captain Sauber-Schatz said those recommendations were rooted in studies looking specifically at physical distancing among students.

“For the studies that have been done looking at the difference between three feet and six feet, those were all between students in the classroom, not between teachers and students,” she said. “We have the science and the evidence to make that recommendation, that three feet is permissible between students in the classroom. We don’t have that level of evidence for the staff.”