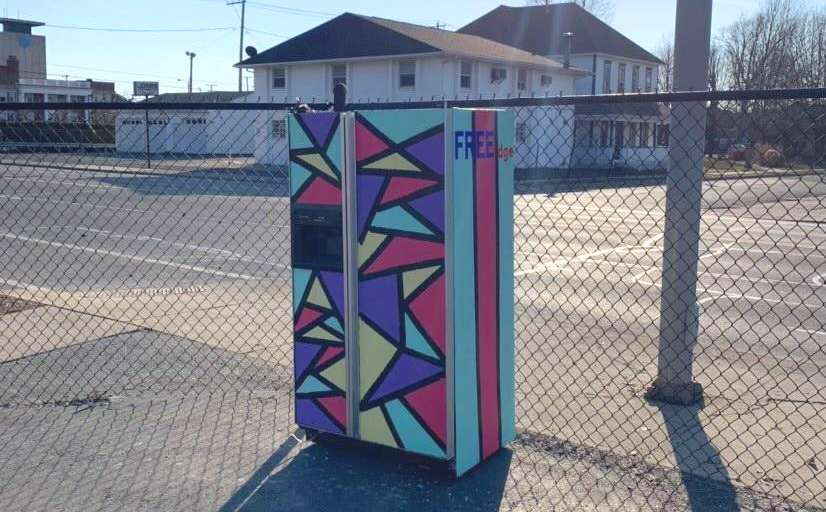 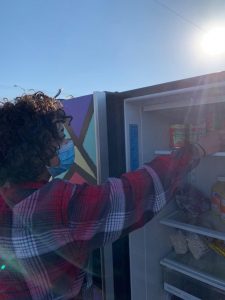 Masked high school students gathered around an unplugged refrigerator painted with vibrant pastel triangles. They took turns packing nonperishable food items into every tray and compartment, then they left.

A week later, the refrigerator was gone.

“It was terrible to lose the fridge, but it shows the need in Muncie,” said Jacob Emert, a junior at Muncie Central High School. “It’s a lot for somebody to steal a fridge without a cord, likely because they needed to sell it for scrap metal to gain money.”

Jacob is one of 30 Muncie high school students who led the ReFreeGerator Project as part of the Muncie Youth Leadership Program — a collaboration among Ball State University Teachers College, Muncie Central High School, Burris Laboratory School and Shafer Leadership Academy. SLA Executive Director Mitch Isaas said the two-semester program teaches students what it means to be a leader, then challenges them to apply that knowledge through a student-led service project.

“This year, with the pandemic and the stolen refrigerator, the students were really put to the test. But through that adversity, they became stronger. They learned to innovate and not let external and internal circumstances get them down or cause them to quit,” Isaacs said. “Everyone in Muncie should be proud and grateful for their leadership and service.”

The students acquired a new refrigerator, which they secured to the fence outside of Blood-N-Fire on Madison Street. They restocked the refrigerator and posted clear instructions. The appliance has been providing free nonperishable food items to neighbors ever since.

Plugging in to food insecurity 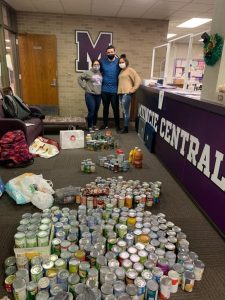 Emert said the group was set on a project to address food insecurity. According to Feeding America, one in four Muncie children do not know from where their next meal is coming, and 78 percent of Muncie Community School students qualify for free and reduced lunch. Muncie lies within a food desert, according to the U.S. Department of Agriculture.

“I went to elementary school at East Washington Academy, and some of my peers at school would clearly not have enough food at home or enough money to get healthy food,” said Emert, who plans to be a forensic chemist. “I saw this program as an opportunity to tackle this prevalent issue in my Muncie community, and once I heard about reFREEgerators in big cities like San Francisco and New York, I shared the idea with the group. We all decided this was the best way for us to help reduce food insecurity in our hometown.”

In the fall, the students researched an issue while they learned about leadership. Then, they presented a proposal to Isaacs and the other two advisers — Muncie Central social studies teacher Adam Cunningham and Burris science teacher Amy Smith. During the spring semester, student groups came together to solve the identified problem and report on their success.

‘A vital program with lasting outcomes’

Cunningham said the program is vital and has led to some innovative outcomes. Last year, during the program’s inaugural year, student groups developed a unity banner, promoted metal straws to reduce plastic use, and created the “Cat Cave” at Muncie Central. The mental break room, which promotes students’ social and emotional health, also connects with students and provides resources via its Instagram and Twitter.

This year, in addition to the ReFreeGerator project, student participants dedicated Saturdays to cleanups, among other service projects. The leadership program, Cunningham said, ignited servant-minded community leaders who are on the lookout for ways to enhance Muncie.

“A program like this is extremely important to foster and develop skills in teenagers that can help them become community leaders,” said Cunningham, who has taught at Central for seven years. “The projects that they create help them take ownership on what’s going on in their home town and to address a problem that’s concerning them.”

Jocelyn Roberson, a 10th-grader from Muncie Central, said supporting her community was “absolutely amazing,” but equally as thrilling and impactful were the relationships she made with peers and the lessons she took away from the experience.

“I am most proud of the project and how close our group has gotten. We all are great friends and get along together so well, and I’m proud that we were able to push through adversity and get the project done,” the 16-year-old said. “I think the greatest lesson I have learned from this is that patience and communication are so important when trying to get things done. That’s what leadership is to me — never giving up and pushing through adversity and helping the people on your team along the way when they need it.”

Roberson said it was surprising the teams got as close as they did, given that most of their interactions were virtual. During most of the year, the group Zoomed from 7-9 p.m. each Monday, and “you can only get so close in breakout rooms,” she said. However, they powered through. 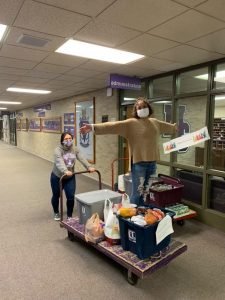 Muncie Central Junior Tiamaya Vargas said she appreciated the ability to connect from home because she didn’t have to find transportation or spend 15-20 minutes getting to a location. The skills and information they gained, Vargas said, came through loud and clear on her screen.

“A leader is also a person who listens to others and actively communicates with their team members; they work hard for their teammates, whether they’re the best or not; they support, encourage, and trust their teammates,” said the 17-year-old, who wants to be a dental surgeon. “I learned that everyone can be a leader, even if you’re not ‘in charge’ or if you’re not working on your idea. Supporting roles are just as important as main leads.”

Isaacs said he and the other facilitators are proud to hear the students talk about leadership in such a personal and assertive way. And if it’s true that actions speak louder than words, Isaccs said, the students’ efforts will be serving up hope for years to come.